Surrounded on all sides by Sydney’s most iconic locations, Gloucester Street is a rare chance to secure property in a truly special location. In this existing heritage block, sixteen two-bedroom loft-style apartments await your personal style and flair.

Enjoy the winding streets and historic charm of The Rocks on your doorstep, with excellent proximity to Sydney CBD, Circular Quay and the arts & culture precinct of Walsh Bay and Barangaroo. Here, an enviable lifestyle can be yours – surrounded by the very best of old worlds and new. 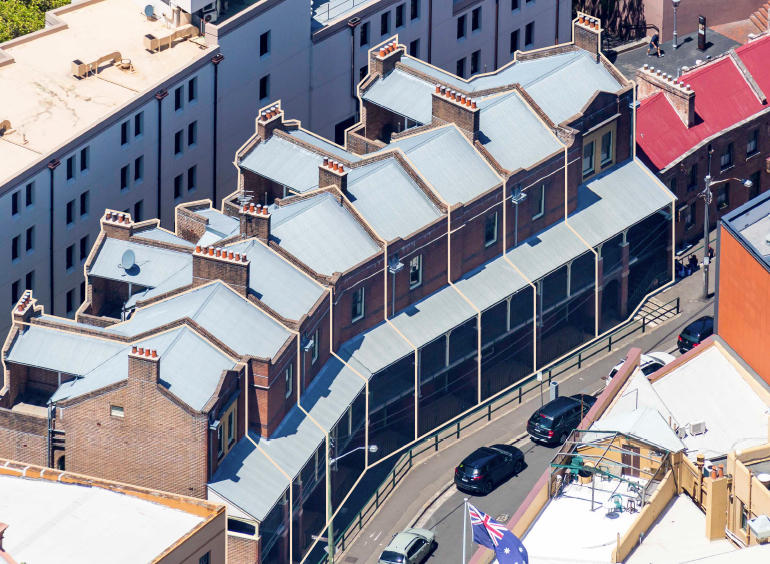 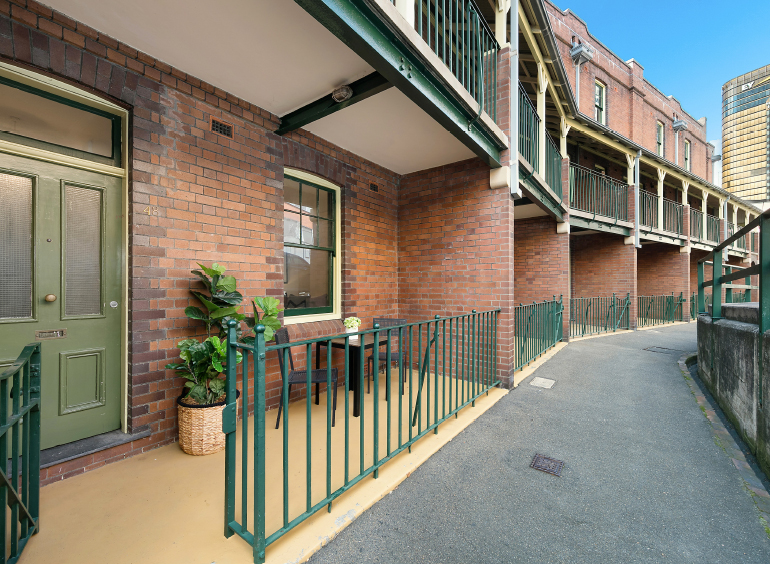 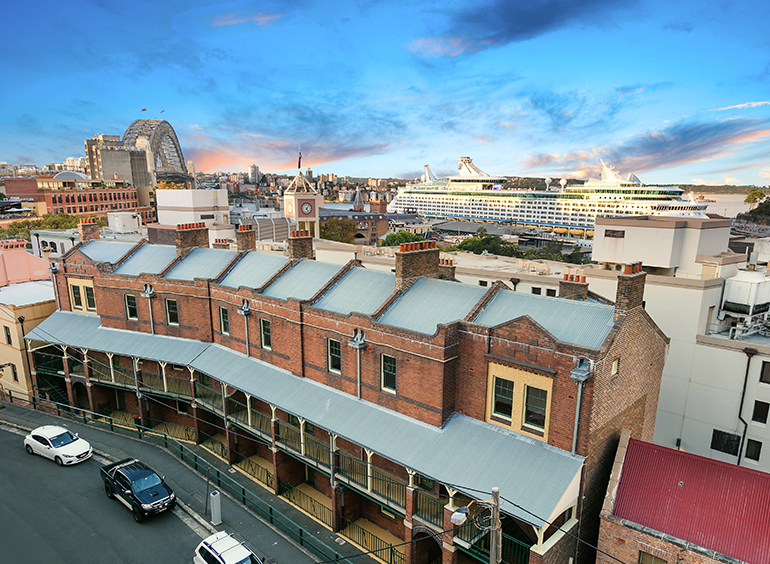 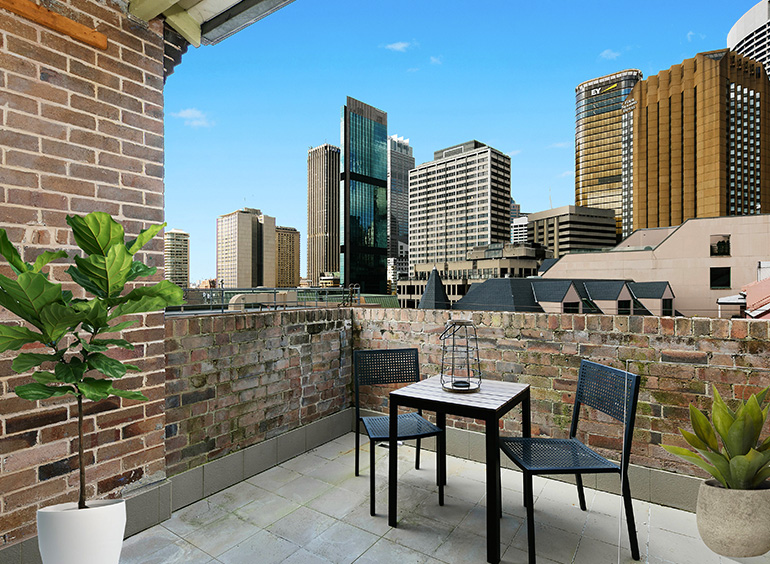 The Rocks was named by the members of the First Fleet, who arrived on 26 January 1788 and established a bustling colony overlooking Sydney Cove. On the rocky slopes above the ‘track’ of George Street, rugged paths appeared – that later became quaint laneways, lined by crooked rows crowded with hundreds of cottages and terraces.

This historic quarter of town enjoys a colourful past. The first issues of the Sydney Gazette published stories of drinking and brawling as early as 1803, and visiting sailors rubbed shoulders with settlers, merchants, emancipists and convicts. Most of The Rocks came into public ownership in 1900. Many residences were demolished following an outbreak of bubonic plague, and to prepare the way for construction of the Sydney Harbour Bridge.

State heritage legislation and increasing tourism ensured the survival of historically significant buildings such as these traditional terraces.

The Rocks has undergone centuries of change since its early days, and is now regarded as one of Sydney’s most sought-after places to call home. 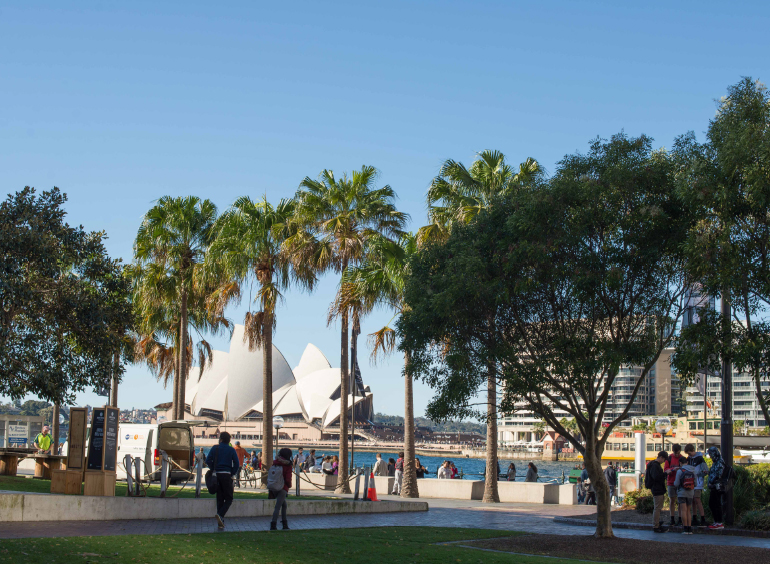 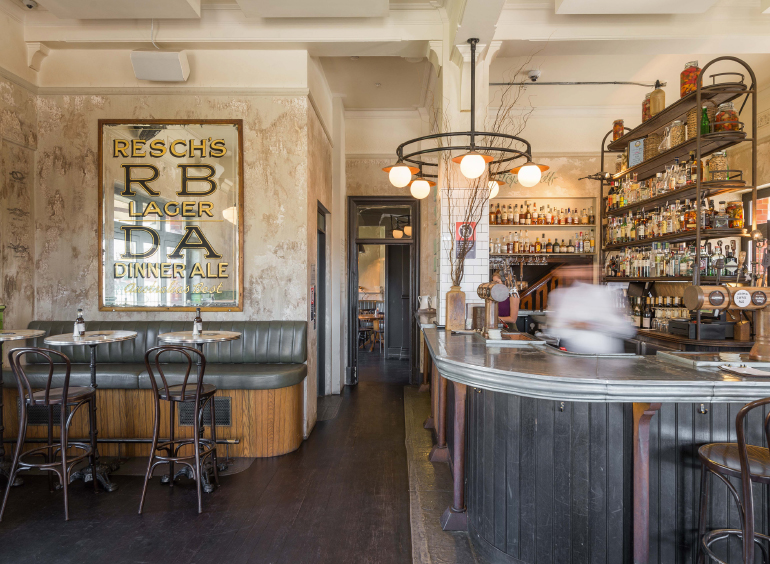 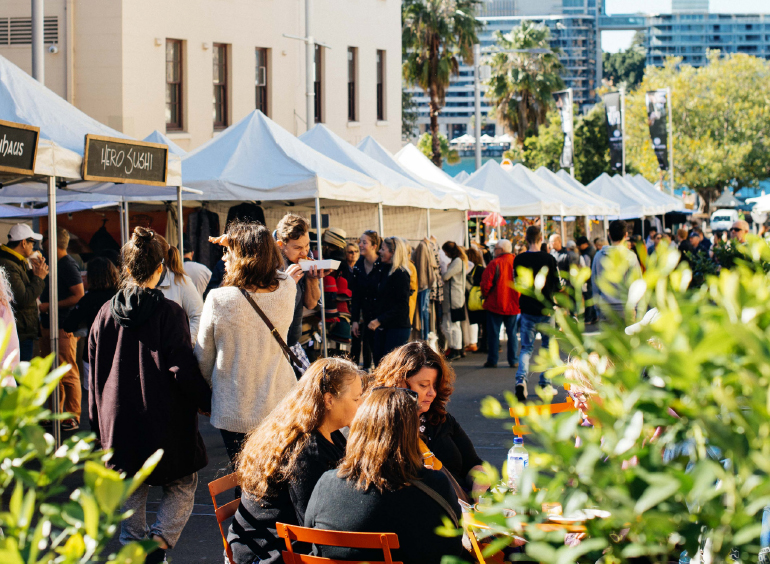 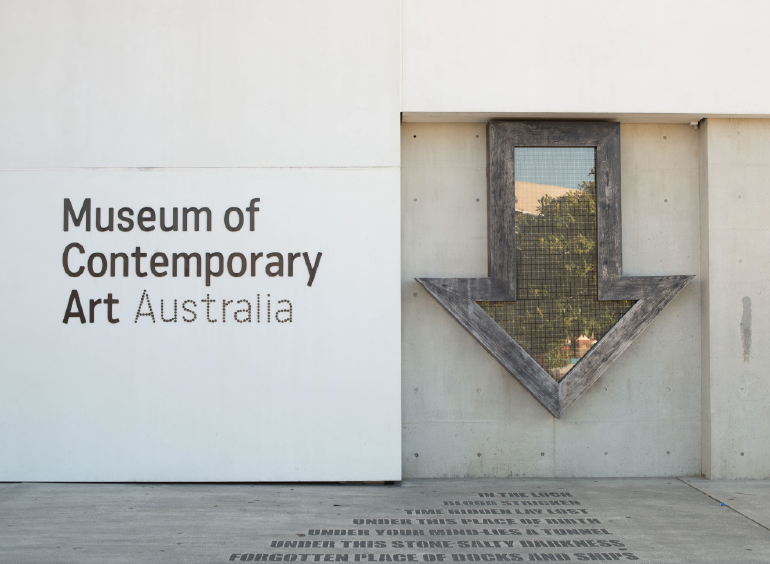 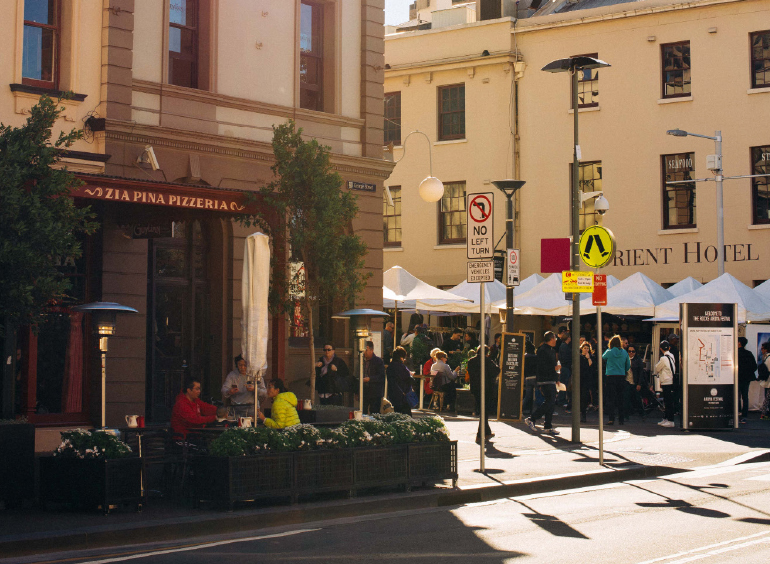 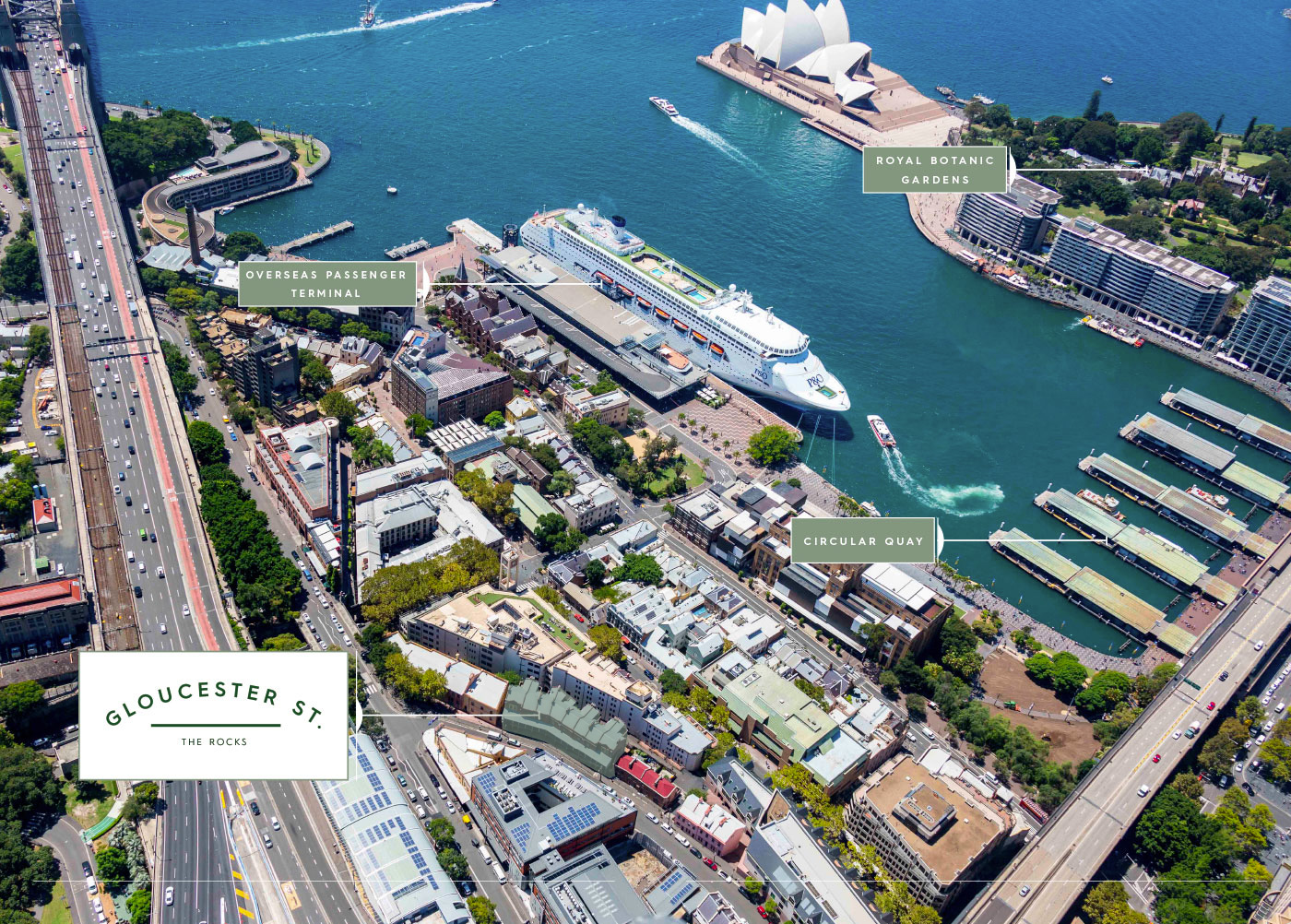 Everything you need is a stone’s throw from the front door of this convenient address. Stroll through the cobblestone streets of The Rocks for weekend markets, or visit world-famous landmarks such as Sydney Harbour Bridge, Sydney Opera House or the Museum of Contemporary Art. The Rocks is well known as a foodie’s paradise, with local and upmarket favourites like Saké, The Cut Bar & Grill and El Camino Cantina waiting to be savoured.

On the Walsh Bay waterfront, find the Sydney Theatre and Sydney Dance Companies, where classes and performances are open to those with a taste for the arts.

The nearby Barangaroo precinct, including the Barangaroo Reserve, is thriving as Sydney’s newest and most premier harbourside location, where business and leisure opportunities abound. 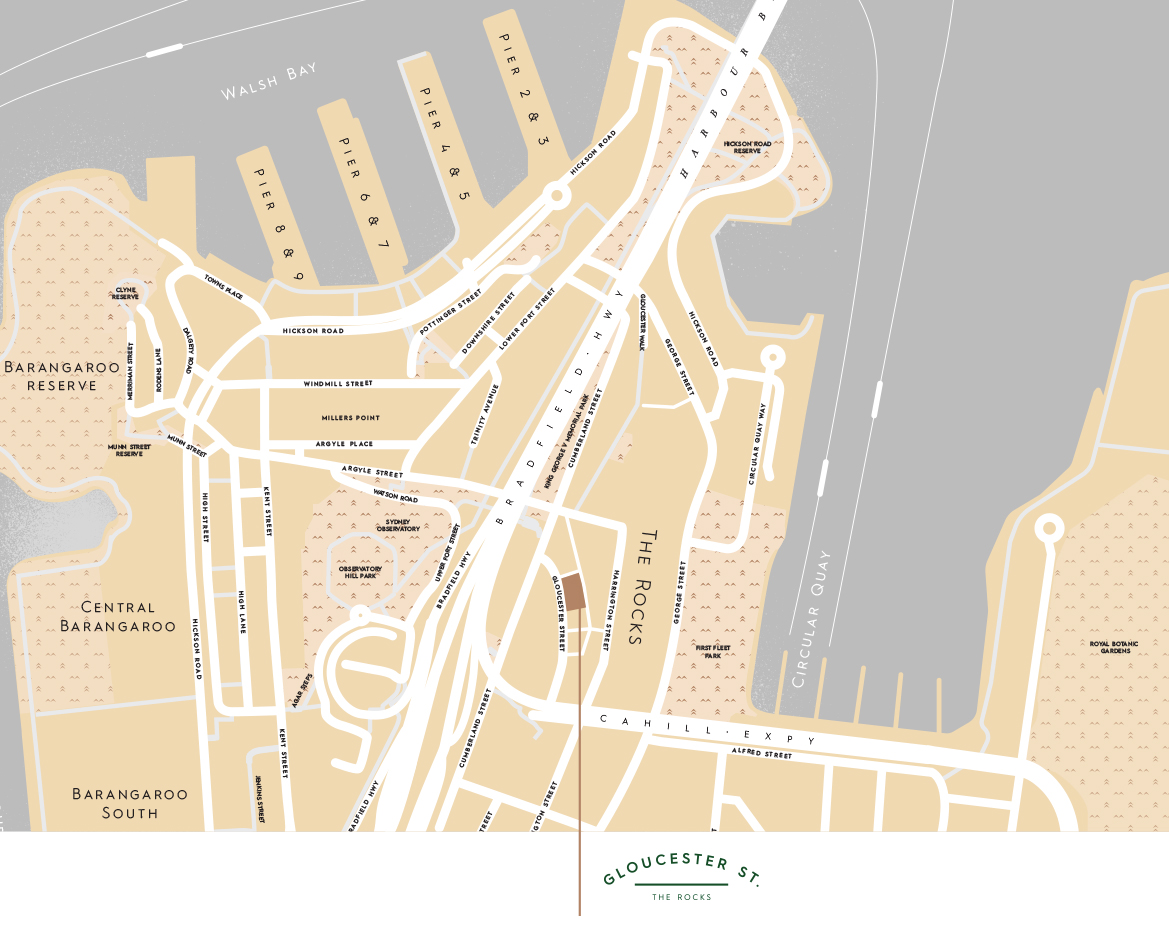 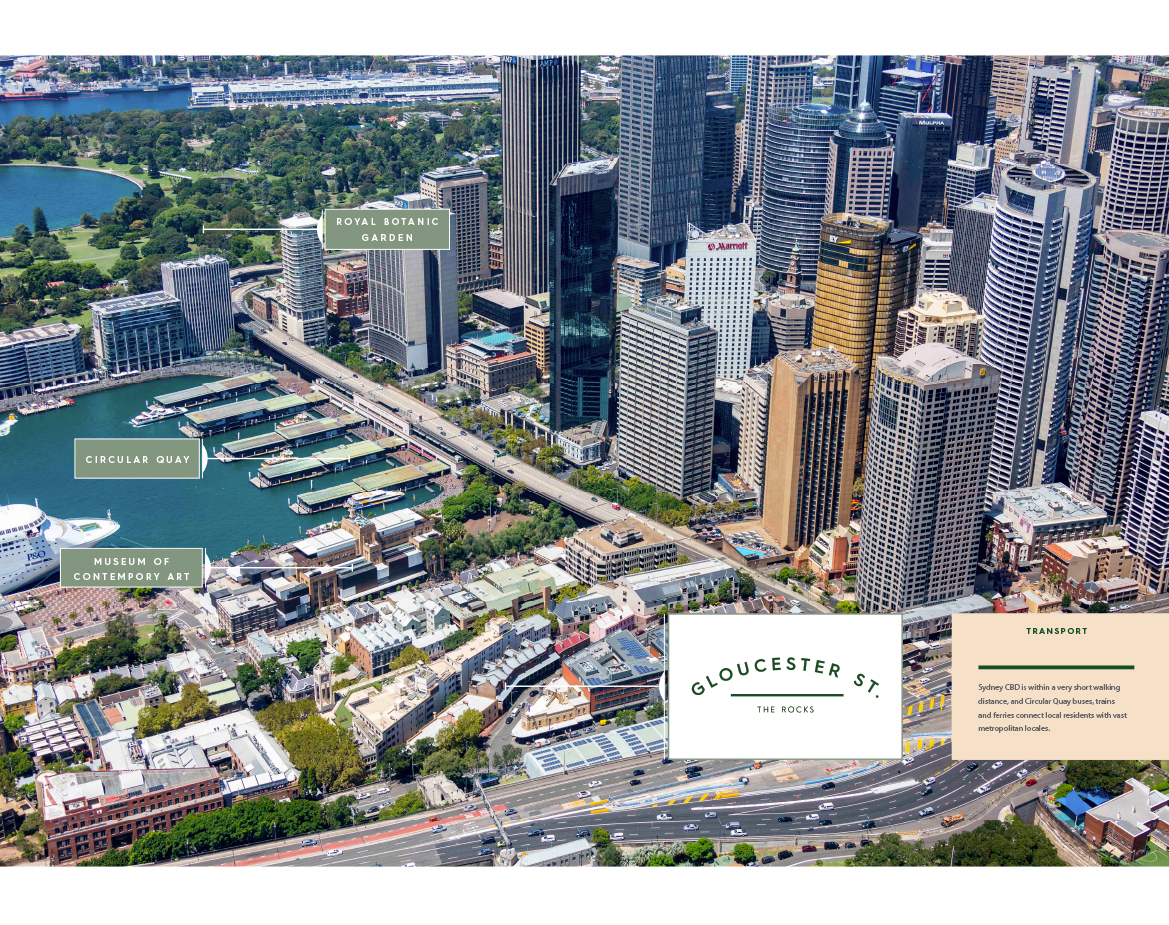 A red brick façade presents the perfect combination of heritage and home. Each of these 16 loft-style apartments is individual in layout and design, awaiting your personal flourish.

A selection of 14 apartments
to choose from